Bulgaria is situated in West Coast of the Black Sea and the eastern part of the Balkan Peninsula. Neighboring countries are: Romania, Greece, Turkey, Macedonia, and Serbia. The climate is Continental-Mediterranean and the time zone is GMT+2

Port Varna is the largest port in Bulgaria, which handles over 8 million tons of cargoes per year. By the use of up-to-date technique including railway and road network the port is a convenient bridge for the cargo flows between Ukraine, Russia, European countries and Asia.

Port Varna is certified as per the requirements of International Ship and Port Facility Security (ISPS Code) and implements quality standards ISO 9001:2000.
Two inland canals connect Varna East to Lake Varna, Lake Beloslav and Port of Varna West. The maximum allowed draft 9,90 m (32'05") and airdraft up to 41,72 m. are allowed to Port of Varna West. The existing depths of the ship berths and the approaches to them allow the handling of vessels of capacity up to 50 000 tones.

The existing port facilities allow the handling of practically all kinds of solid bulk, break-bulk, containerized and some liquid-bulk cargoes. By the total volume of these sorts of cargo, Port of Varna is the indisputable leader in Bulgaria. The structure of the port includes two component port units: Varna East and Varna West

Varna - The Sea Capital of Bulgaria

Today Varna is the largest city on Bulgaria's Black Sea coast and is the main port for both naval and commercial shipping. Because it is a close neighbor to the popular coastal resorts of Golden Sands, St. Constantine & Helena, and Albena, Varna has a cosmopolitan atmosphere. Varna is also the host city of numerous prestigious cultural events.

City landmarks include the Varna Archaeological Museum, exhibiting the Gold of Varna, the Roman Baths, the Battle of Varna Park Museum, the Naval Museum in the Italianate Villa Assareto displaying the museum ship Drazki torpedo boat, the Museum of Ethnography in an Ottoman-period compound featuring the life of local urban dwellers, fisher folk, and peasants in the late 19th and early 20th century. The Sea Garden is the oldest and perhaps largest park in town containing an open-air theatre (venue of the International Ballet Competition, opera performances and concerts), Varna Aquarium (opened 1932), the Festa Dolphinarium (opened 1984), the Nicolaus Copernicus Observatory and Planetarium, the Museum of Natural History, a terrarium, a zoo, an alpineum, a children's amusement park with a pond, boat house and ice-skating rink, and other attractions. The National Revival Alley is decorated with bronze monuments to prominent Bulgarians, and the Cosmonauts' Alley contains trees planted by Yuri Gagarin and other Soviet and Bulgarian cosmonauts. The Garden is a national monument of landscape architecture and is said to be the largest landscaped park in the Balkans. 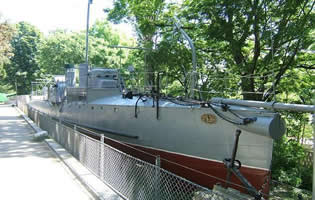 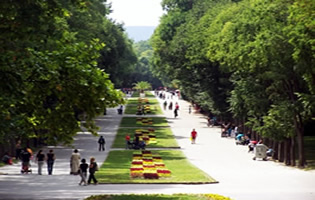